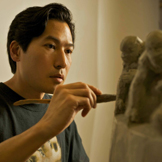 Tsuchiya is a Cincinnati native whose parents are from Japan. He is an alumnus of the University of Cincinnati, Indian Hill H.S. and the apprenticeship of sculptor Richard Miller. Upon completing his education, Tsuchiya has combined his passion for sports and sculpture in specializing in sports related sculptures.

Here are just a few examples of Tom’s work.